Themes
PROBABILITYTRAVELHOUSINGNEWSTAXES
PROBABILITYTRAVELHOUSINGNEWSTAXES
Blog > Moving to Spain: Why May Spain Be a Great Place for Retirement in 2021?
Spain is certainly among the most well-known countries in the world and can easily be pointed out on a map in the snap of a finger. Widely known for its warm weather and beautiful beaches, Spain is, year-after-year, a top destination for tourists coming from all around the world.
A staggering 83 million people visited the sunny country last year, making it the seventh consecutive year of record-breaking numbers. Not only is it a good place to visit, but you should also consider moving to Spain for your retirement. You can easily get a house in Spain along one of the coasts which could be a great place to spend time at as a retiree.

This article will answer the question by covering the following points:

How Expensive is Living in Spain in 2021?

It is feasible to retire in Spain on £2,000 per month depending on the city you are planning on staying in.

Attention drawing cities such as Marbella and La Moraleja can get very expensive, considering the fact that these places are often praised by wealthy individuals. Some luxury real estate in Marbella can be priced at more than £20 Million. Thankfully, there are some other jewels on the coast in which you can make a living out of a few euros.

Indeed, the average rental price in places such as Malaga can be seen as approximately 195% lower than in London (UK). When you move to Spain, some of the costs you will encounter will be quite similar to those in your home country. These costs are usually related to water, electricity, gas and international services. However, you will notice a difference when it comes to transportation, food, accommodation, and local services.

These lower prices are explained by the higher unemployment rate, lower average salary and the crisis that hit the southern part of the Iberian Peninsula. As pension amounts are decreasing along the years, the low-cost aspect is definitely not to be taken for granted. Living in Spain may be great as it will help you save a couple of bucks.

What about the Spanish Healthcare System?

The country of Spain has a highly reputable healthcare system. One of its main advantages is the fact that the system guarantees free universal coverage for all residents. Hospital services are not only free for Spanish citizens but for people who are: 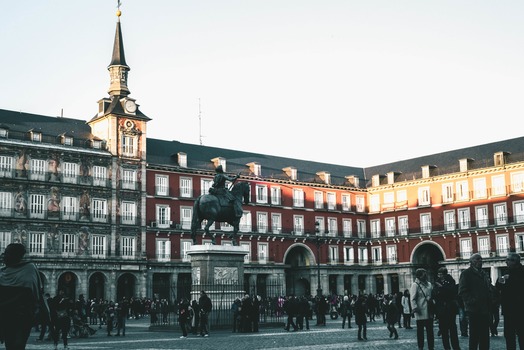 Which Activities Can You Do in Spain as a Retiree in 2021?

Another way for you to find your post-work contentment is through the entertaining activities Spaniards have to offer. Moving to Spain will be one of the best decisions you will have ever made as you will never run out of places to visit. From the Sagrada Familia in Barcelona or the Almudena Cathedral in Madrid, Spain has a lot of monuments and vestiges you should be on the lookout for.

If you are not in the mood for visits, you can always enjoy a warm day on the beach, watch a soccer game at Santiago Bernabeu or even attend a Flamenco show. Additionally, you will have the opportunity to get a taste of the lively Spanish nightlife as there are numerous pubs and clubs around the country and its magnificent islands. On the coastline, the sunny weather will show up late to the party.

After 40 long years of work, could you see yourself spending time without the exhilarating sunrays. In all likelihood, they will help you fight depression, reduce stress and strengthen your immune system. Additionally, a lot of people enjoy their retirement in Spain by playing golf, fronton and tennis. These are fun ways to stay fit and busy during the day. As the Spanish retirement age is only 65, you will find plenty of 60+ aged playing on the courses and courts.

As a retiree in Spain, you will have plenty of time to spend on tapas crawls and restaurant evenings. A plate of tapas typically costs three euros and can also be freely provided given that you order drinks. As soon as you will have hit the Spanish retirement age, you will have plenty of free time so why not get Tapas. Going out for tapas, also known as “tapear” is consistently appreciated by Spaniards and part of their rich culture.

If you have the opportunity to settle down in Valencia, you have to try the Paella Valenciana. This traditional rice dish originated from Valencia and is undoubtedly one of the most appetizing meals in Spain. The rice is usually accompanied by seafood, olive oil, spices and vegetables. Do not forget to try Crema Catalana and Jamon Iberico. These two will never fail to amaze you due to their distinguished tastes. When it comes to drinks, you will find your happiness in the variety of tasty wines at hand. The Rueda is a wine that stands out from the rest, but you are welcomed to make up your own mind.

What are the Differences Between Living in Spain and Living in the UK?

Even though Spain and the United Kingdom are two countries with similar cultures of the West of Europe, the life styles are very different from one another.

The retirement age in the UK is 66 while the Spanish retirement age is 65. It could be less if you started working earlier than everybody else. Living in London can be stressful as you can be surrounded by a lot of people that are very preoccupied by their careers and their personal lives. In Spanish coast cities, a lot of people seem to be enjoying their lives more. They have the time to live in the moment and enjoy the little things in life like a meal with the family or a long walk. In other words, living in Spain can be much more peaceful and relaxing than living in the UK. According to Canarias, more differences can be observed through:

Where Can You Find Your Next Spanish Retirement Property?

There are lots of ways to find your next Spanish Retirement Property such as Idealista or Spotahome: However, one of the freshest ways to find retirement properties in Spain is through a house raffle. A raffle could secure you a brand-new house along the beach for tickets at a price of £2.

You can participate in a raffle through Cloverhut. Cloverhut is a Spanish company that gives you  the chance to win a home on the Spanish coast for tickets at a price of £2. The process is 100% legal as it is approved by the Gambling Commission and the raffles are held before a notary. Winning a beach villa is without a doubt a life changing experience. You too, can get to experience that feeling by participating in the raffle here. Remember! With two pounds, you are 222 times more likely to win the prize than the Primitiva Lottery. Am I Eligible to Buy a House in Spain?
Next